Sometimes memories seem to slip up on us and shake us by the arm saying, “Remember this?  It was important!  You learned a lot more than you realized at the time.”  Here’s the story of just such a memory.  It has influenced my thinking about teaching and learning in ways more profound and relevant to my practice as an educator than any number of graduate classes.

When I was twelve years old my grandfather, Arch Warnock (AKA Grampie), taught me how to sharpen saws during a summer visit in Smackover, Arkansas.  He found an old saw blade in his shop that I couldn’t harm, loaded me up in his 1957 Chevy, and drove me to the local hardware store.  He told the owner of the store he needed a saw handle because his grandson was going to learn to sharpen saws.   He attached the handle and showed me how to tighten the blade into place on a rack behind his shop.

Then he went to work showing me how to use a tool to set the points of the saw.  Alternating points had to be accurately set which meant I had to pay attention and not miss one.  After setting the points, he taught me how to read the points and set my file.  Consistently holding the file at the proper angle and moving it in a straight line were difficult skills for this twelve year old student.  He placed his hands on mine and led me through the process, never expressing frustration at my faulty and sometimes clumsy first attempts.  Gradually he let me take over while he continued to coach and make adjustments.

Then came the hard part…PRACTICE!  He would leave me to work on my saw and then return in an hour or so.   He tested my work by cutting a quarter inch piece off of a two-by-four. After a few quick strokes and a look at the saw blade, he’d scrape the tips off of the whole saw with two sweeps of a large flat file.  This meant it was not cutting correctly and I would have to do the whole saw again.  After watching me file and making suggestions, he’d leave me to my work.

This went on for several days during which I gradually gained some confidence, skill, and blistered fingers.  I finished sharpening the saw for what seemed like the 75th time; now for the big test.  As my grandfather made the first few strokes with the saw, I noticed a smile forming around the mouthpiece of his pipe.  He sawed clean through the wood in a few smooth strokes, stood back and declared, “That saw will cut!”

I’ve never forgotten the pride I felt as my grandfather proclaimed the saw would cut; that saw I sharpened would cut!  This was an early taste of real self-esteem, the result of struggling to learn something new and coming out on the other side with the ability to perform a task that seemed impossible in the beginning.

My grandfather did the following:

1. He gave me a clear goal and made it relevant to a real world problem.

2. He set a high standard and believed I could meet it.

3. He coached and encouraged me while giving honest feedback about my performance.

4. He gave me opportunity to practice in a hands-on way.

5. He showed unconditional love for me regardless of my skill and celebrated my success.

I did not make a career of sharpening saws, but I think Arch Warnock would be pleased that his grandson is a school principal and that those lessons in sharpening a saw have shaped my beliefs and influence my work to this day.  When I see students succeeding because of the work we do in our school, I sometimes imagine my grandfather looking on from a distance and saying with a smile, “That saw will cut!” 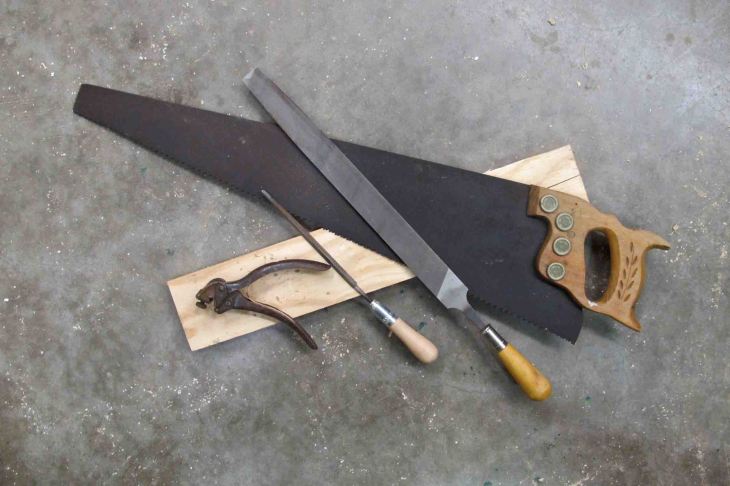 The saw my grandfather gave me along with a point set tool. 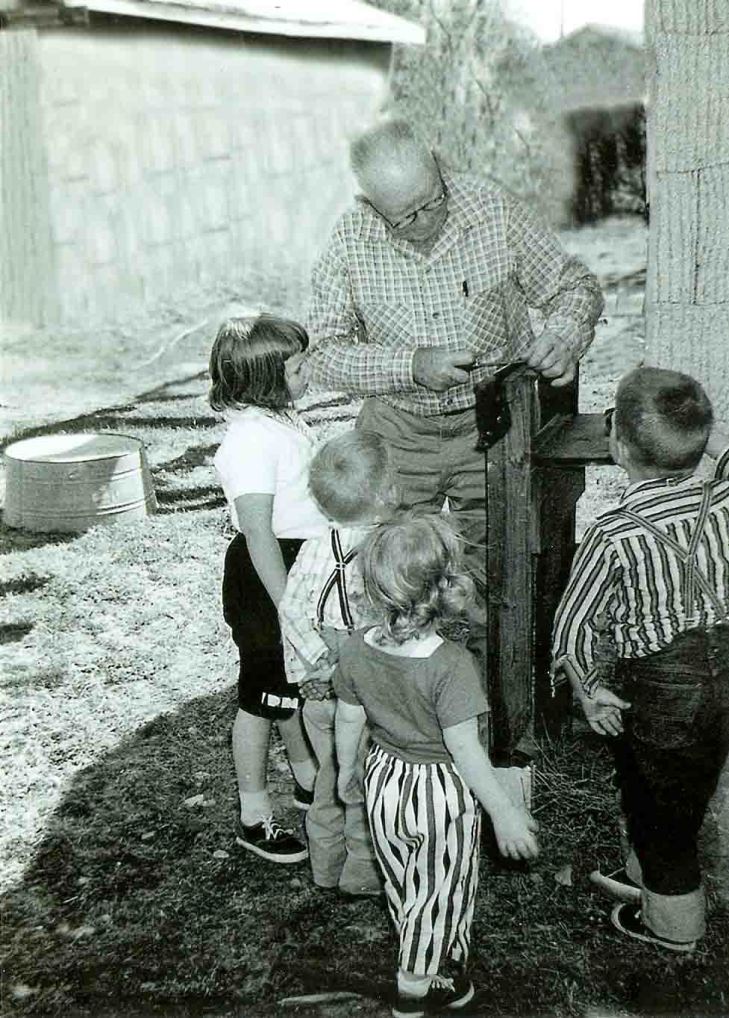 Grampie sharpening a saw as his grandchildren looked on. I’m second from the left.

By ozarkmountainhiker in Uncategorized on January 9, 2014.
← “CAN You Draw a Texas Longhorn?” February School Newsletter →

I'm a retired educator. I enjoy learning and sharing with others. If you like the outdoors, check out my other blog: ozarkmountainhiker.com